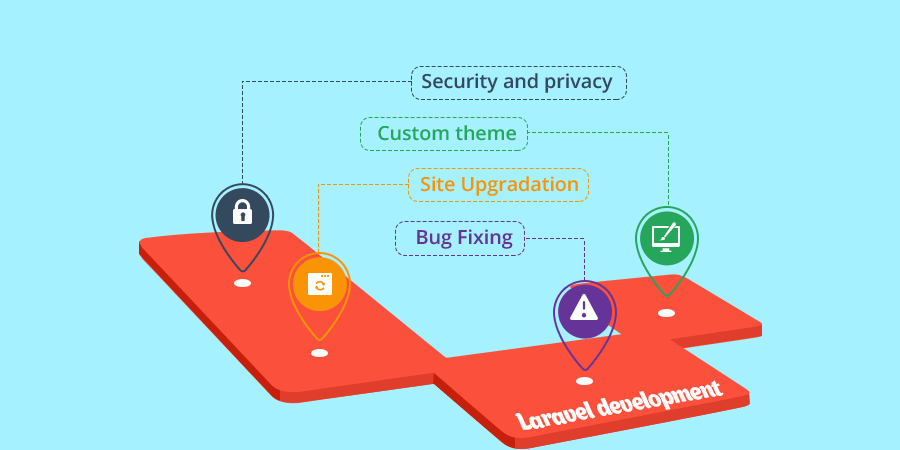 Every company is different and so are its needs. When it comes to web application development the choice of framework is not a tough choice. You simply have to go for Laravel because it happens to be the best one. The MVC framework has been used to make more than 1.08 million websites and web applications in the United States, the United Kingdom, India, Canada, Australia, and European Union countries.

History of Laravel and its Versions

Laravel version 1 was released on June 9, 2011 to fill the missing features like out of the box authentication and closure routing in CodeIgniter by Taylor Otwell.  With the each releases Laravel framework is empowered with some interesting features which make Laravel to stand out against the other PHP framework Zend, CodeIgniter, Symfony, and Yii.

Whether you are a startup or a famous enterprise, a Laravel web development company will help you meet your business needs. Laravel’s first model was released in June 2011, while the most recent one was released in September 2018. Wondering what makes Laravel the best framework for web application development? Here are six things that’ll make you believe:

A company is constantly growing. Getting new clients and opening up new product and service lines. Both these situations need the application to work fast so that the customers don’t have to wait too long. Laravel’s ability to handle difficult processes is incredible. Also, it can easily be connected to caching systems like Radis and Memached natively that allows the web application to boosts its performance. When you configure, Laravel stores cached objects in the file cache driver, which is inside the file system.

Every business needs a highly secure framework that products employee and client information, new product data, and information related to research and development. Laravel actively helps Laravel application Agency India to keep web applications of its clients safe from prying eyes, so you don’t have to worry about any virus threats. According to Laravel’s website, maintaining high security is its biggest goal.

Whoever invented the quoted time is money said it correctly. Since it is an MVC framework, development is a lot faster because the coding required is minimal. It gives you more time to spend on the deciding design, configuration, and security of the web application. Before you hire Laravel web developer, discuss with him how much time it will take for application development and then allow time for design development.

Hosting a web application becomes an expensive affair as the traffic increases because the host will have to process more requests at one time. If the server receives more traffic that it can handle, it can crash, which can lead to data loss. This directly converts into the loss of customers and a lot of loss in business. When you just begin the development project, you are offered the message queue system. Its primary use is load balancing, which helps you to protect your server and maintain a good balance. The system maintains data integrity and increases the speed of the web application at the same time.

You expect a business to grow, which means that the web application should be easily scalable. That is only a possibility when the framework supports scalability. If you have to develop a multilingual application, Laravel should be your first choice because it can easily reach out to a large number of audience.

Being a popular web development framework has its own perks. Hire dedicated Laravel programmer India who is part of the huge community offered by Laravel framework. There will be times when the coder might come across something that he doesn’t know. He can simply ask about it in the forum and get it solved. Many experienced and creative web application developers from around the world are a part of the time, so the coder will always find immediate help.

When it comes to developing a web application with Laravel, there’s no one better than Kanhasoft. Contact us to develop your latest application idea. Our representative will reach out to you immediately.