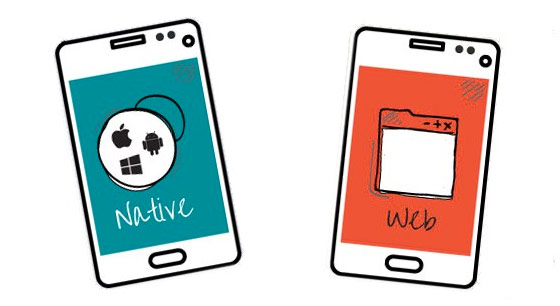 Web apps are running inside the mobile browsers like Internet Explorer, Safari, and Chrome instead of App Store or Google Play. We do not prefer hybrid apps as performance and speed of hybrid apps are lower than the native apps.

In Native Apps, you have to submit your apps to App Store or the Google Play Store. The user needs to put an extra effort to find and install it from App store. While in Web Apps User can run it in the browser. In Web apps, the user can run the latest version only. With the native apps, you have to support different versions and the user has to install the new updates for the latest version.

Web apps can be run through internet connection only. While in Native apps some functionality can be used without internet also.

For Web apps, you require the browser and can be run on any platform. On the other hand for native apps, it takes a lot of effort and development skills for each OS. And developing these apps are costly too.

Native apps can easily access native systems features like push notifications or running your app in the background. While in Web apps it requires lots of work to make these possible.

For developing Native Apps you have to follow the guideline of each platform and in Web apps, you can omit the ecosystem and deal straightforwardly with your users.