This article will have insights on the combined advantages of Doing Web App development with Python programming language and Django framework.

Python language is a high-level programming language with dynamic semantics. Also, Its built-in data structures, and combination of dynamic typing and binding, make it efficient for fast application development.

Django is a high-level Python web framework, which encourages fast development, clean and pragmatic design. And, created by skilled and expert developers, Which looks after all the hassle of web development. Moreover, it helps to focus on writing applications without needing to reinvent the wheel.

Python has emerged as a most loved and popular programming language among developers across the world. The stack overflow survey of the last two years provides the fact to believe it. Have a look,

In 2020, python maintained its place in the top 3 on the stack overflow survey. 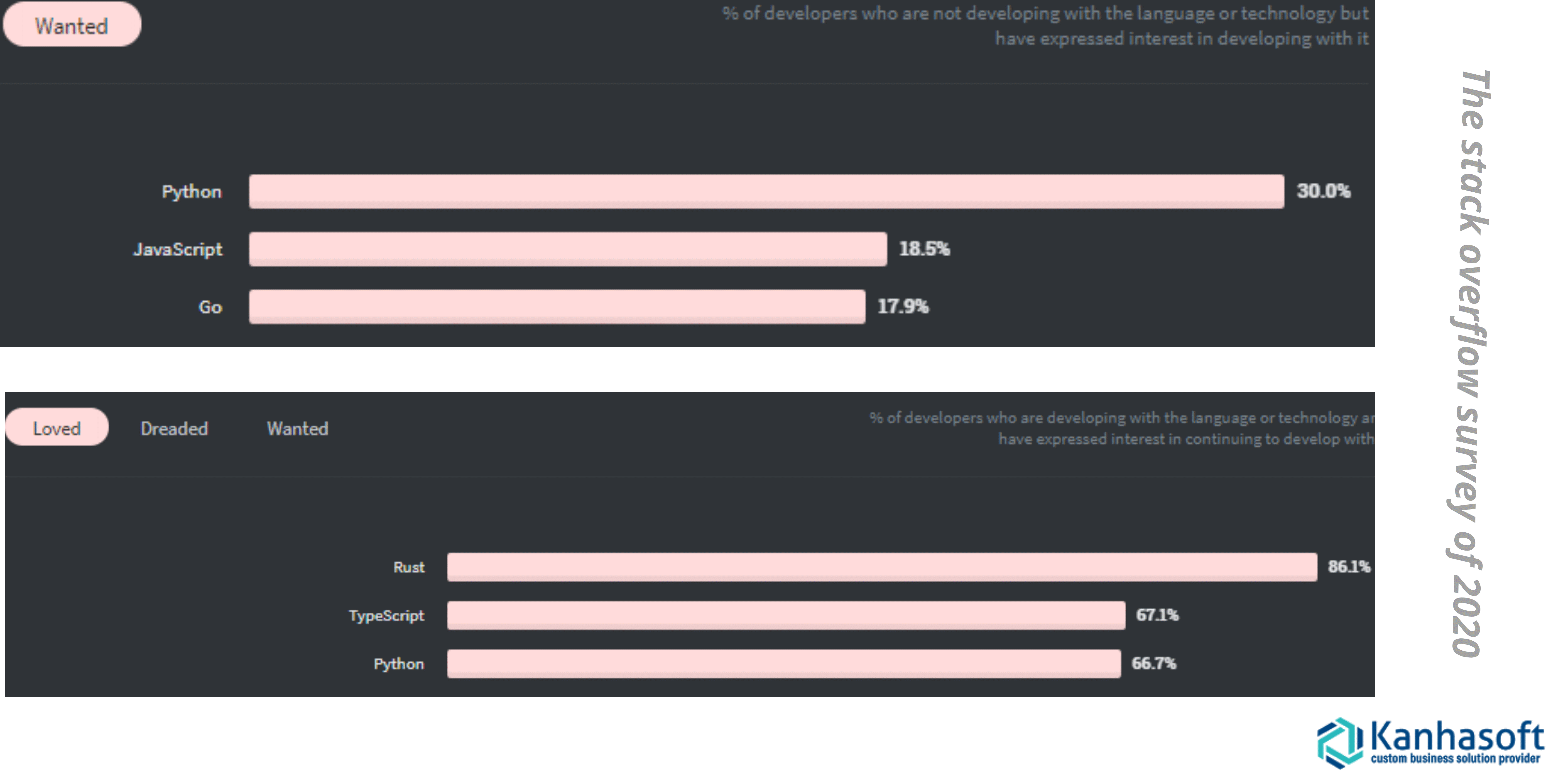 Here it still maintained its 1st position for most wanted languages, and with a slight change as the 3rd most loved languages of the world. 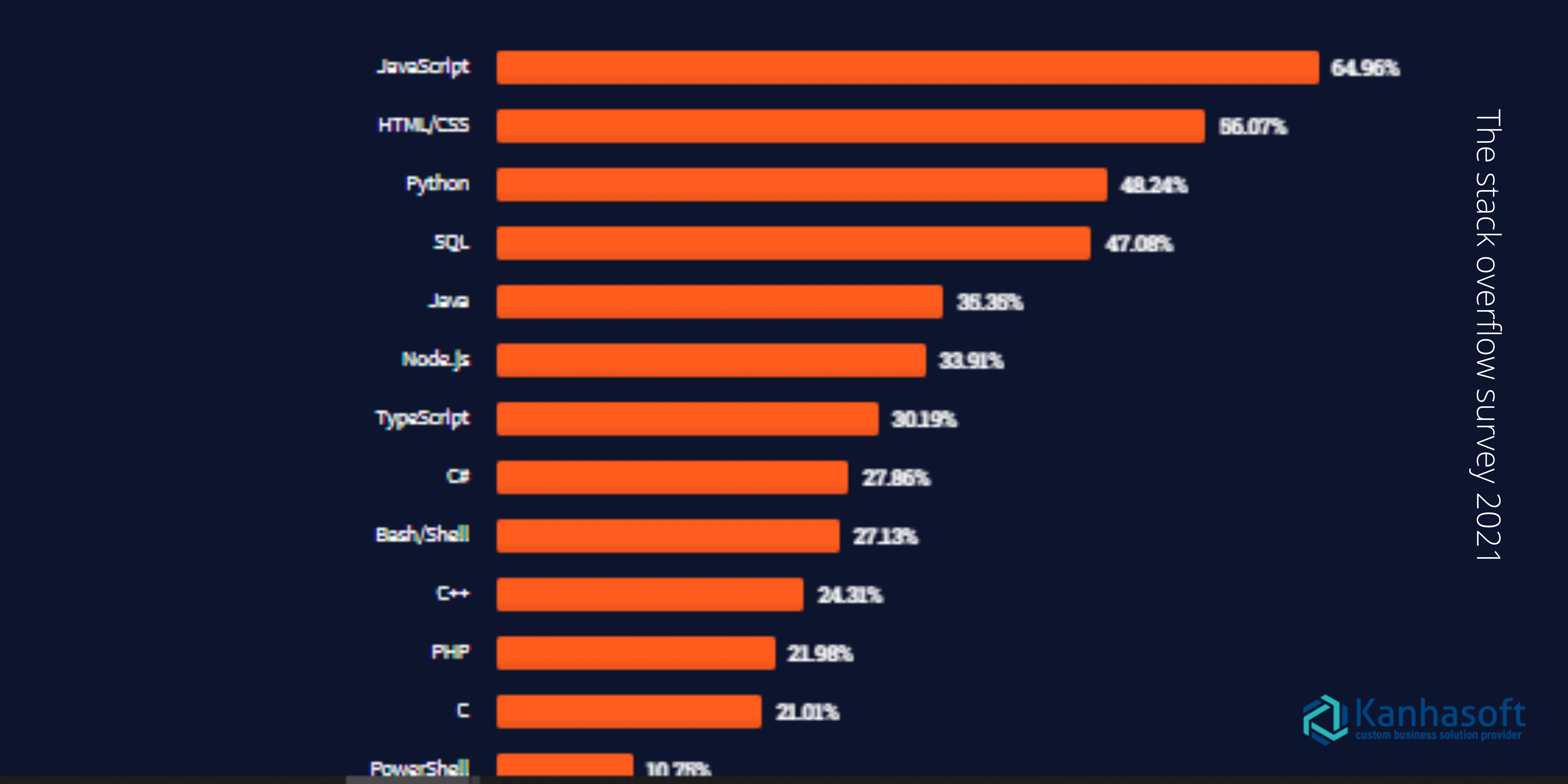 So, the above facts and the rising demand for python programming language among developers and tech industries drive us to know more about its benefits and outcomes.

Despite, python being consider a mature or old language. Its demand and popularity have not declined as compared to other Old languages. The reason is its efficient programming structure. Many developers prefer it due to its powerful readability and efficiency compared to other languages such as Java, C++, PHP.

Python is a very reliable and dynamic language. Also, many large-scale projects and startups prefer the python language because of its immense benefits. It is usually opted by the starters due to its easy learning curve compared to Java, C++, or Perl.  You can learn the language in a few days and start coding.

Also, applications built using the Python programming language can scale well. It is more powerful when you have hundreds of users accessing the application at the same time.

So, let’s have detailed insights on the benefits of doing web development with Python/Django:

1. Python is easy to learn

The language is easy to learn because of the syntax that resembles the pseudo-code. It just takes a few days to learn the language, and then you can jump to code the applications with ease.

You can perform better with less time and effort due to the steep learning curve. Therefore, many newbie developers love it. Even if you are not aware of, How to code? You can easily code with the Python programming language.

So, if you want to start your career as a developer, you can start with the python programming language.

2. Python has a Robust stack of frameworks and modules

Python offers flexibility to several programming languages and frameworks that make the app development process fast and easy. Web developers can choose Django, which allows you to write the site or app without needing to Reinvent the wheel.

Hence, these frameworks and environments help developers to be more productive in Python language compare to other languages. Django is considered the most widely used framework for the Python programming language.

Most importantly, the combination of Python programming language and Django framework will get you good results in your app development.

3. Python is budget-friendly for your Businesses

Managing the budget in the early stages of setting up a business is essential. When compared to other languages, the codes of Python language are lesser and Easier to code. Also, you can write a proof of concept smoothly with the Python programming language.

As a result, you can lower the number of developers working on your project and reduce the team size and cut costs.

With that, you don’t have to compromise on the quality of your project. And, to mention, the Python App development company in India offers the best quality services at reasonable and affordable prices. So, you can share your goals with us. Our Python Application Developers in India will provide you with top-notch solutions and services.

4. Python with Django offers a Spectacular Framework with a solid administrative Interface

The advantage of using Python with Django is its spectacular framework that comes with great features and functionalities. Also, the solid administrative interface lets the user customize it. It also provides you a choice to select the desired functionality.

Software is considered ineffective in the absence of a scalable feature. To forecast the future of web products, it becomes essential to scale the product completely. Django offers effective scalability. The series of components that developed Django are independent of one another(decoupled). And, it helps them to create a rich-featured, modern web application that can be modified or extended in the future. It allows web developers to scale a web product thoroughly.

6. Python code is intuitive in reading

The python language syntax is clear and concise. It designs to be readable and similar to actual English, which makes it easy to decipher. Moreover, Python programming language requires fewer lines of code to achieve results compared to other languages such as C or Java.

Python mainly helps when you have to read the code from another developer. Code review becomes Easy with fewer lines of code to review, and the code reads like English.

Python Code is Easy to Understand and Navigate. Which helps to lower the amount of work needed to maintain and expands your codebase.

7. Python is a Stepping stone to learn other programming languages

A starter with no coding knowledge will develop simple web apps with an easy web development tutorial, Which is a bit hard with other languages. After working with Python web development. It becomes easy to work with other programming languages such as Perl, Ruby, C#, and JavaScript.

Hence, if you want to start your web development career, the Python programming language will provide you the best learning platform. And, also helps you to learn the concepts of other languages which follow the same principles, irrespective of their syntax.

Python language allows developers to write clean and concise code for large-scale and small-scale projects. The main feature that makes the Python language compatible with large and complex applications is its ability to support multiple programming paradigms. It supports,

Django’s documentation is incredible. It launched with high-quality docs, and it still maintained this efficiency, which makes it super easy to use.

Moreover, the main aim of Django is to simplify the development process by covering the basics, which allows developers to focus on the more unique and complex features of the project.

As always said, Web developers and SEO do not share good terms. They always tend to cross-function. But the case is different while using Django. Django supports human-readable URLs. Also, it helps you to boost your website ranking by adding keywords to your URLs. Django indirectly becomes helpful to the SEO team and makes their work more satisfying.

So, choosing the Django framework for your app development will help in satisfying the SEO needs.

Django offers several benefits to develop an effective web app. It makes it easy by introducing features and tutorials such as online support, a guide to quick-start your process, and a detailed release description. It will help you in facing lesser issues as everything here is properly plan and made. Short, simple, and easy tutorials and documentation are the main USP of Django. Whenever required, you can go through those tutorials and descriptions anytime.

If you want to build a new app from scratch with less time in your hand, then Django is the perfect web framework for you. Django’s flexibility of creating templates or utilizing the already built-in template language makes it efficient to develop applications ready for deployment.

Moreover, Django is the foundation of sites and services like The New York Times, Pinterest, Instagram, and more. Kanhasoft – The best Django App Development Company in India! Will develop a powerful and efficient application for your project in no time with 100% satisfaction. Hire Django Application Developers in India!

Python programming language requires lesser code compare to other languages to draw more functions. So, it becomes easy and smooth to build prototypes with python language.

It is very flexible, and this feature can be understood well by its integration with other robust programming languages.

It has large libraries, which include the functionality you can use to develop large-scale applications. You can improve the efficiency of your web applications with these features. It makes it easy to upgrade and update apps smoothly.

Hence, opting for the Python programming language will provide you with several resources to unleash the benefits.

16. Python is in use by Blue Chip Sites and Services

The Extremely flexible and scalable features of the python programming language have attracted many major blue-chip websites and services, namely – Instagram, YouTube, PayPal, eBay, Reddit, Dropbox, Pinterest, Yelp. And they use python language as their Core Language.

So, it’s Obvious that learning python can pave your way to several work options like – You can land your own business.

17. It is a hot commodity in the Era of the Internet of things (IoT)

Python’s popularity is a considerable asset that has led to the development of large pre-written libraries which is easy to implement and deploy working solutions. Python is portable, expandable, and embeddable for IoT. Python also works great for managing and organizing complex data. Python’s close relation to scientific computing has enabled it to gain around in IoT development.

18. Python is in use by most of the Tech Giants

Major IT giants and IT infrastructure make use of Python language for their project developments. These groups are – NASA, Yahoo!, Google, JP Morgan, Nokia, Disney, Mozilla, Instagram, YouTube, and many more.

So, as far as these organizations are present, there will always be a huge demand for Python web developers.

Note: Want to upscale your business with excellent results? Trust us! We are the leading Python App Development company in India. You can hire Python Application Developers in India. Our team of expert developers is available 24*7 to guide you through your next project.

19. Python Addresses the needs of fintech

The rise in the popularity of the Python programming language has attracted the hedge fund and investment banking industries. Also, it has led it to be the fastest-growing language in finance. What is needed to enter the world of fintech? It requires a language that is powerful, easy to scale, and mature. Therefore, these banking industries have decided to choose the python language because it addresses many of their specific needs.

It is one of the main reasons our Django Application Developers in India love this framework. As every business owner of today is concerned about the security of its application. So, it becomes necessary for the developers to develop a secure app.

The applications of Python/Django are numerous, and so are its benefits.

It’s perfect for web app development, the internet of things, startups, large-scale web applications, fintech, and many others.

Overall, the Python programming language is easy to learn, clear to read, and simple to write. And the combination of Python with Django framework will work wonders for your App development.

Still, have any doubt? Reach us for any questions. We will be happy to help you. To know more about our services, check out our website!